A couple hundred hours later, I finished building 1.0 of that game. 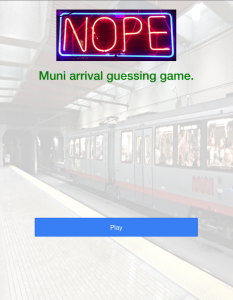 I ended up building it using the ionic framework, and have published the android version of it on Google play. If you have 60MB to spare on your phone (due to lots of tiny videos of Jasper) and a small child who likes to guess things and touch screens, you should totally install it. I even wrote a theme song for the app.

“Nope!” uses realtime data from 511.org. If there is no internet, it just makes it up like Jasper would.

I also made the source code available. That’s just how I roll.