My Parents First Visit After Vaccination 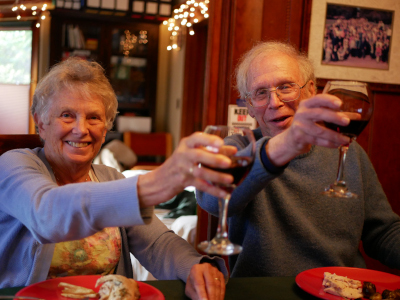 It is such a poignant time now as well. Vaccines, hugs, people, summer, sunshine, sports upon more sports, shifting plans, body aches, planned and spontaneous gatherings, and in real life smiling faces. Celebrations and brewing adventures. And I finally saw my parents.

1. Do you think that meditation might be a good idea?

2. Have you ever been in therapy or worked with a personal coach?

3. Do you ever consciously try to be present in the moment?

4. Have you ever felt a deep connection to a plant or the earth?

5. Have you participated in a ceremony or ritual with a community?

Overcoming the need to be useful

I wanted to make a good first impression when G-Research requested that we (the Open Source team) shepherd new functionality into OpenStack (the open source cloud infrastructure we use). I was a new contributor to OpenStack and I was motivated to demonstrate that open source could play a role in even the most secure environments.

Our goal was to enable SSL communication for OpenStack services, so that internal …

I’ve put time and care into the creation of my eigth album, Study Music, and created something I feel proud of.

Looking backwards, though, I had a hard time with the reception to my seventh album, “Oughta See”, from a few years ago. I was surprised that people didn’t seem to dig it as much my as previous work. It motivated me to ensure that things would go better with my next release.

I determined that I wanted …

A few years ago, prescription medication damaged my hearing. I now have tinnitus, which is a constant ringing in the ears. I also have hyperacusis, an uncommon condition where loud or percussive sounds physically hurt me – and aggravate my tinnitus. This means I am vigilant about protecting my ears, wearing earplugs or a headset virtually all the time I am not by myself. These conditions turned my world upside down. …

How I turned the corner

I’m both proud and relieved to report that I turned a corner in my life. I have trudged through darkness and come out on the other side.

There was almost a year in my life when I didn’t believe that life would get better. My hearing conditions are permanent, the options in my life narrowed, and many ordinary life situations became more challenging. This was the time when I was unable to see the path forward, so I …

The most recent tonal therapy is called Acoustic CR® Neuromodulation, and there’s a dandy scientific paper that …

In 2013, I felt like I had reasonable handle on how my life would unfold. I had an established career, a stable marriage, a small child, and a hobby or two. Sometimes life veers sharply from the anticipated path, and unfortunately that is exactly what happened to me.

In 2012 I tore the meniscus in my left knee while doing a fairly routine yoga pose – one that I had done hundreds of times before. Over the following …